None of this growth would have been possible if I hadn’t had the space to step back from the day-to-day, understand which systems and processes were needed to add more structure to our business, and changed my role as a leader. ANZ and the Australian Centre for Business Growth’s programs have propelled us on a fast trajectory.” John Joseph, Managing Director, Aambianz

Established in 2004, Aambianz is an Australian-owned company whose goal is to be a global leader in harnessing and integrating renewable energy with contemporary aluminium cladding. A rapidly growing national company about to go global, Aambianz specialises in aluminium facades…

Founded in 2004 as a design consulting firm, Aambianz began manufacturing in 2010 and experienced rapid, organic growth until 2016, when the company had some challenges.

“We had phenomenal organic growth right up until 2016, and we thought we had everything in place to allow that to continue, but we plateaued and stopped growing.”

Although the business was successful at product development and customer engagement, after attending the ANZ Business Growth Clinic delivered by the Australian Centre for Business Growth, John realised that Aambianz didn’t have strong enough management systems in place to enable it to scale. In addition, he wasn’t playing the right roles for the company’s stage of growth. Everyone relied on John to make all the decisions, and he wasn’t delegating to others. The increasing number of day-to-day decisions was making it difficult for him to find time to step back, assess the risks and threats to the business, and think about how to capitalise on the opportunities.

“Sometimes as a CEO, if you are focusing on the day to day aspects of your company, you don’t get the time or the space to grow what you need to grow.”

John knew that he had the right products and engaged customers, but after attending the Clinic, he realised that Aambianz needed more systems, a longer planning horizon, and more accountability.

John also began to understand that the way he was leading needed to change. Rather than making all the decisions as the “Genius with 1,000 helpers” or being a “Command and control” leader, John began to delegate, hold people accountable, and expect self-management and delegation from them, across the whole organisation. He added people with new skills where there were shortfalls, developed a management team, and empowered an executive team to help him make decisions and grow the company.

Before coming to the ANZ Growth Programs, John had only planned one year ahead.  Now, John and his team have three-year plans and are developing business plans for the coming decade.

“CEOs know their products and customers, but we often fail to realise that everything operates as a system and that processes and systems are needed to actually bring everything together and enable a business to expand and multiply.”

John and his team developed three-month plans at the end of each module, went back to the company and executed on that plan, and then reported on progress at the next module. He used the modules as an opportunity to engage and educate his team, to build the muscle of execution, to step back from the day-to-day management of multiple business functions, and focus on the areas where he could add the most value. The Aambianz team stepped up, took on more responsibility, aligned around the same goals and committed to a three-year growth plan.

“As it turned out, I was one of the main reasons our growth was stifled, because I was managing the majority of the day-to-day decisions being made in the business. Since I have delegated, I have more time to be more involved in things I’m good at – and the things I should be focusing on as a CEO. We’ve identified what growth stage we’re in, and we are leading and managing accordingly” John Joseph, Managing Director,  Aambianz 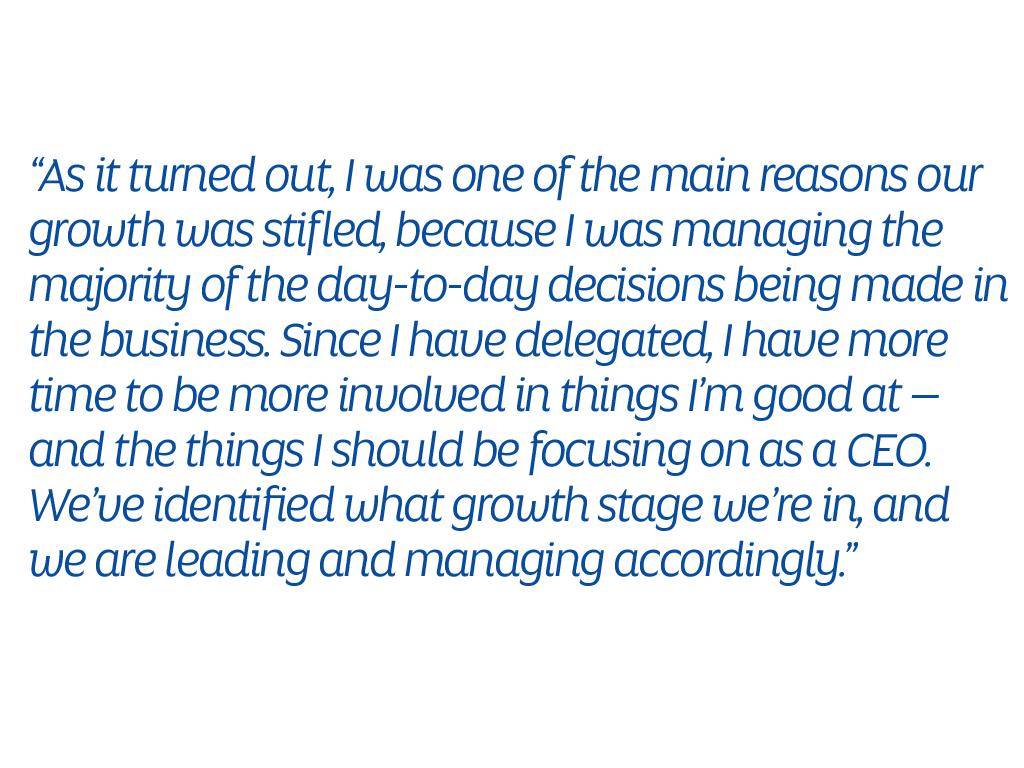 In FY19 Aambianz grew by over 40% and added 12 employees. John made the strategic decision to diversify the business into several business units and invest in new technologies and develop multiple new products.

Foremost amongst the new technologies is the development, testing, and certification of non-combustible and fire retardant cladding suites for residential, commercial and industrial building facades,  soffits, internal walls & ceilings.

This new Australian venture branded as Olamclad, is already acclaimed as the finest by architects and influencers within the construction industry. With testing completed to Australian standards and certification obtained, considerable growth is anticipated in the coming years.

“None of this growth would have been possible if I hadn’t had the space to step back from the day-to-day, understand which systems and processes were needed to add more structure to our business, and changed my role as a leader. ANZ and the Australian Centre for Business Growth’s programs have propelled us on a fast trajectory.”

Using their own experiences and insights gained through starting, growing and exiting their own companies, the Growth Experts review your prep-work, teach, facilitate discussion, provide feedback, and help you develop your company’s growth plan.