Sealite  – “I’ve completed an MBA, but the Centre’s programs move beyond business concepts and put management theory into actual actionable practice. And it’s an opportunity to learn from experts and spend time with other CEOs who want to grow.”

Sealite is a global manufacturer of marine aids to navigation (e.g., buoys, bridge and solar marine lighting, monitor and control equipment). The company has manufacturing and office locations in Australia, Singapore, the United States and the United Kingdom. Sealite’s 50,000 sq. ft. production facility in Australia is focused on the design, development and manufacture of marine products.

Why Sealite CEO Chris Procter recommends the Centre’s ANZ Business Growth Program, which comprises of a one day Growth Clinic and the nine month Growth Modules:

“I’ve completed an MBA, but the Centre’s programs move beyond business concepts and put management theory into actual actionable practice. And it’s an opportunity to learn from experts and spend time with other CEOs who want to grow.”

Chris Procter’s father founded Sealite in 1982. The company had built a global reputation creating leading-edge products for marine authorities and private customers. Revenues and profits had been growing at a steady pace, and company culture was, by-and-large, healthy.

Chris had taken over management of the company and had a nagging feeling that there was untapped potential within the business. As Sealite approached its 35th anniversary, he felt the need to reimagine how the company could grow, keep itself on the cutting edge of innovation and remain globally competitive.

So when he heard about the Centre’s programs, he thought it would be a structured way to measure what they were doing against “best practice for growth” to ensure that Sealite was positioned for growth in the years ahead.

For Chris and the Sealite executive team, the first benefit of the program was the opportunity to step outside the day-to-day running of the company and spend three days together during each of the three modules. The time to think and strategise, and the expectation to focus on the business, not work in the business, required new kinds of thinking and collaboration. They also found the Growth Experts, other CEOs and executives from medium-sized growth companies, and the integrated set of tools and programs invaluable.

The Growth Modules, which are part two of the ANZ Growth Modules Program, are comprised of three, three-day intensive modules spread out over nine months, with homework and prep work in between the modules.

During the program, the Sealite team identified what was working and what needed improvement, recrafted their company mission and values, and broadened their vision of what Sealite could become, and identified what would be needed to scale.

Two opportunities were vital to achieving their growth goals. The first was capitalising on the opportunities in the US market. While Sealite had a solid business in the US, the team realised that there was huge untapped potential, and that they needed to move quickly and capture more market share before the competitors did. The second was finding the right balance between selling more of the current Sealite products in the market vs. continually innovating, changing and developing new products. Chris had to transition the company from loving to design new products to loving to sell the products they had designed which is not an easy transition for any company-but essential if the company wants to grow. Chris and the team realised they needed to change the way they had been doing business.

They assessed everyone’s functional performance and fit with the company’s values. Executive team members had to change the way they were communicating, delegating and leading. They realised they were too hands on, and that in order for Sealite to grow, they needed to delegate some responsibilities and focus on becoming more efficient in everything they did–from ordering, manufacturing, design and development, sales, to delivery.

For Chris this meant that he had to pull himself out of being directly involved in every task. He had to focus on communicating, planning, strategy, and coaching his executive team, rather than being at the coalface of the business himself. In short he had to become a different leader than his dad had been.

“A key behaviour change that came out of the modules was changing our management style and having more clarity around our roles. I had to transition from being a ‘doer’ to much more of a leader and coach role.” 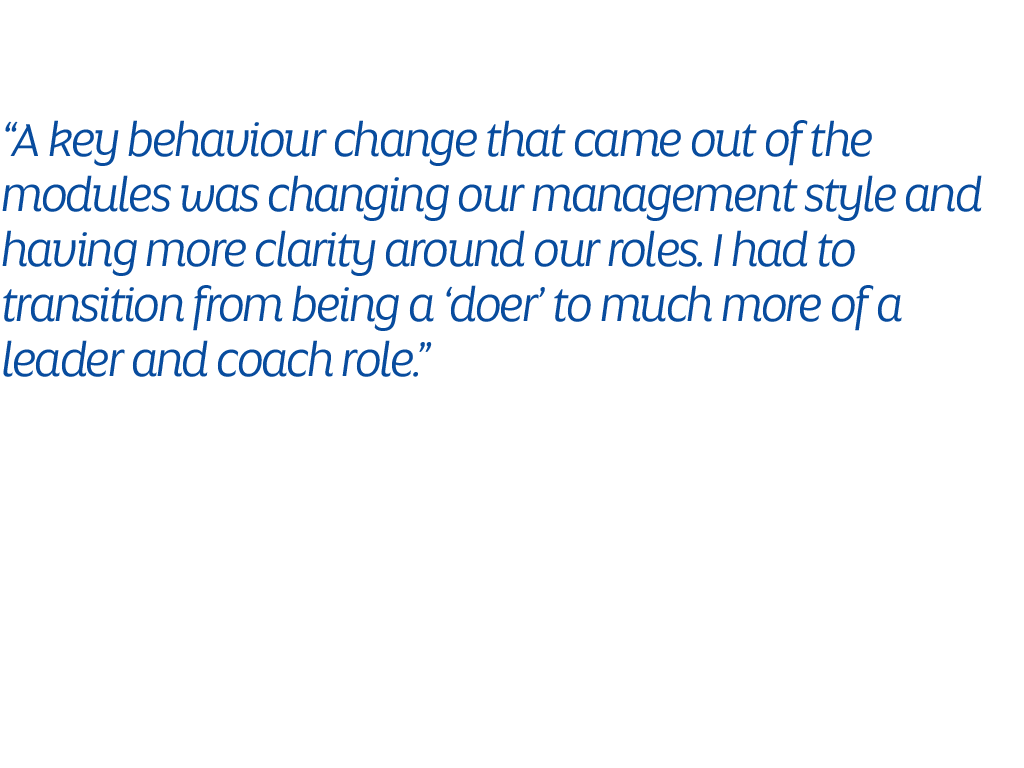 Since graduating from the program, Sealite has a much clearer and more streamlined vision for growth and has laid a strong foundation for the next stage of growth.

The organisation structure has changed, with a high-performing executive from the Australian team redeployed to lead growth in the US market. Sales and marketing teams now having much more responsibility and autonomy.

Staff who weren’t a good match with the company’s values have been transitioned, and other roles have been realigned.

The pace of change during the program was intense. Chris recalls winning the award for having the most aggressive set of goals to be accomplished between the second and third module, The Growth Experts noted that if his team could implement these changes, they would be structured to truly achieve breakout growth over the coming years.

While Sealite had always been a successful and well-managed company, its participation in the Growth Clinic and Growth Modules has re-energised the entire organisation. Chris and the team left the program ready to drive another 35 years of excellence and business success.

“We’re now ready for the next stages of growth. We’ve realigned staff roles and empowered teams to help take us on our future journey.”